My main task this week was to populate the Teacher Resources page which provides the instructors with the information on how to prepare to teach a lesson on WordPress using materials created by WordPress training team.

And this is how my internship comes to an end! It’s been amazing three months that offered me plenty a new knowledge about:

Huge thanks to everyone I met on this journey especially my kind and supportive mentor 🙂 I hope that while it’s my last Outreachy-related weekly status post here, it’s not my last post ever and I will continue contributing to WordPress community/training initiatives.

Last week we have finally added the quizzes to the handbook pages which was agreed on earlier. So feel free to check it out! This is how it works:

I really encourage everyone who has a bit of spare time this week to try to register, click a little bit around the quizzes and see what you like about it and what should be improved. Really, any kind of feedback would be helpful.

Additionally, I’ve written a couple of lesson plans last week (Building a Sitemap and Customizer: Taglines) and an instruction of how to write a lesson plan which summarizes the principles and ideas I follow myself when doing it. It can be also used for any kind of tutorial or even an e-learning course.

This week is going to be my last Outreachy week! It’s hard to believe how fast time goes by. And I plan to wrap up working on the Teacher Resources page I mentioned in my last post, finalize everything else and write some final thoughts on this experience.

Last week I completed Widget Areas, What is contact form 7, What is Google XML Sitemap, and Improving Site performance lesson plans. Additionally, I’ve been working on the outline for the Teacher Resources page. The idea of this page is to provide trainers with the information that will enable them to work with lesson plans in a more efficient way, i.e:

Besides, after a short hiatus we’re continue working or the WordCamp organizer/WordPress meetup organizer trainings. As we have discussed earlier, because of the sync problem between the handbooks and the training pages we have to add the quizzes created for the trainings to the end of a related handbook page (and also create a page describing why we added quizzes and instructions on how to register at the website hosting quizzes). ‎

The screenshot below shows how a link to a quiz might look like and I’ve also composed a draft of the Quizzes page.

Please add your reactions to any of these ideas, suggestions or changes, and any other thoughts about the lesson plans/community trainings in the comments or google documents!

It’s time for my new weekly post and a new list of lesson plans I’ve put together last week:

(they are yet to pass copyediting)

The whole process is really fun as I learn a lot myself about the way one can use WordPress (which unfortunately slows me down with lesson plans as I have to understand all of the concepts and try things myself first before describing it, but also probably helps me explaining the perspective in a way which is digestible for a novice).

If you have any questions or suggestions, please feel free to ask them in the comments 🙂

I mentioned last week I will be starting with writing lesson plans, so here are my first ones:

And here are some of the ideas I was keeping in mind when writing them:

Last week I was continuing on working on the training team projects. Some the improvements I mentioned in my previous post were implemented and I also went through the feedback from the trainers who were testing the existing lesson plans, analyzed it (overall the feedback is really good) and wrote a post about it in the Making WordPress training team’s blog.
This week I’m going to try to compose some lessons plans myself, starting with a WooCommerce lesson in the “Setting up Ecommerce” unit – really looking forward to trying it!

The last week was a break from WordCamp/WordPress meetup organizer training as some of the decisions regarding their organization are on hold. So I was doing some work regarding enhancing the Make WordPress Training Lessons. The idea was to make the materials more accessible and didactically digestible for the teachers who are preparing to present them in the classroom. Generally, I think the existing lessons are really good, it’s great that all of them follow a certain structure which contains learning objective, prerequisites, screening questions, etc – it definitely makes trainer’s work easier. If you haven’t seen the lesson plans yet, here is a sample of what they look like: Managing Comments lesson. So to begin with the enhancement the three things we decided should be added are:

Here are the resulting documents:

And just in case – please, feel free to let me know if you have some other ideas on what that should be done to make the materials better!

It is a lovely rainy day today in St.Petersburg, which is perfect when you actually need to do some work (my room windows face west, so it can be really hot and uncomfortable in the evening if a summer day was hot and sunny). So WordCamp Europe contributor day which I mentioned in my previous post actually helped us realize an issue with the course organization (so the lesson here is: do beta testing as early as possible! It’s always helpful to get an opinion of someone from outside the group which is working on the project). I have written a detailed post on this in the official blog of the community/outreach team for the WordPress open source project for us to be able to understand how should we proceed. You’re welcome to check it out! 🙂

Time goes by really fast and I’m writing this sitting in the Vienna Schwechat airport waiting for my plane as WordCamp Europe is already over. Those days were filled with awesome people, events and things, but per best instructional design practices 🙂 I’ll focus on the top three things I really enjoyed about WCEU.

As a newcomer I was smitten by such a chill, low-key, welcoming environment. Even though that wasn’t quite a regular WordCamp, but the biggest in Europe (check out a panoramic image WCEU shot at Q&A with Matt Mullenweg – whoa, that’s a lot of people!), it still felt cozy and open for everyone, regardless of the experience level. And all the automatticians (employees of Automattic, the company behind wordpress.com) were really super-nice and invited me tag along despite the fact that I was overwhelmed and stricken with introversion most of the time 🙂

After two days of listening to the speakers it felt really good to move to action! Not only it was amazing to see five hundred people willing to contribute to WordPress and get to know what are other teams doing, but we also had a chance to test the WordCamp & meetup organizer training courses which I was working on last month. And there was a lot of useful feedback which we’ll use to improve. You can take a look at the document which summarizes what we found out here.

Three of the most important findings are:

WordCamp Europe 2016 really was the kind of conference that was open to everyone, regardless of experience with WordPress, with a diverse range of topics. This was really helpful to me to get a better perspective in what is going on in the community and learn from others’ experience. I have selected three talks I was most impressed with – and you can watch them as well at WordPress.tv:

To sum up, I think the biggest “take away” for a myself as a first time WordCamp attendee is about how big and generous the WordPress community is. And that even one with not much expertise in coding can become a part of this community and start contributing. What’s required is really just some persistence, a tiny bit of bravery and willingness to learn and explore. And I do have all of that 🙂 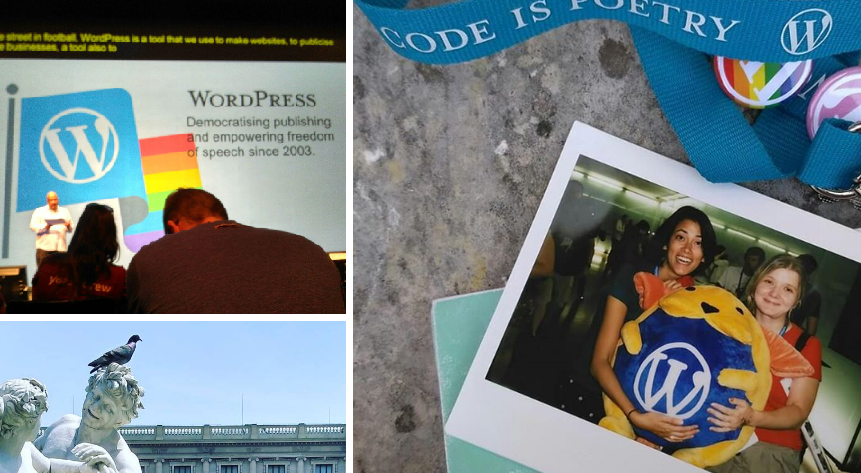 The last week I was working with a newly created WordPress Meetup Organizer handbook. The training as it is now can be found here. As you can see, the pages were moved to the testing site and small quizzes were added. You are very welcome to try it out, and if you have any feedback regarding the way it works please feel free to let me know.

Some changes we will implement later are:

Another alteration of the initial plan I didn’t mention last time is that we decided to have small quizzes after each lesson as opposed to larger quizzes at the end of each module, that is composed out of several lessons. The reasoning for that is that Sensei is designed in the way that if you want the “composed” quiz, all of the questions have to be linked to the module’s last lesson – which can become a disadvantage if you decide to move one of the lessons to another module or delete one of the lessons — the questions appended to this lessons will get orphaned and end up impeding the learning experience. On the other hand, having all questions based on the lesson’s content linked to exactly this lesson enables a more flexible, chunking and reuse-oriented structure.

Next week I’ll be working on questions for the WordPress deputy handbook-based training. And I will also get to go to WordCamp Europe, which I’m so excited about! The whole trip is actually thanks to Outreachy Travel Allowance: as part of Outreachy internship, an intern has a $500 travel allowance, which can be used to travel or gain admittance to a relevant conference or meeting. And I’m really looking forward to seeing community members in person and witnessing all the WordCamp glory and bonanza in real life, not just imagining it while reading the WordCamp organization-related materials. So please expect a full report about this trip next week 🙂 And now I have a question to other interns who are reading this blog 🙂 – what conferences/events related to your internship do you plan to attend? Will it be soon? Will you get to travel?